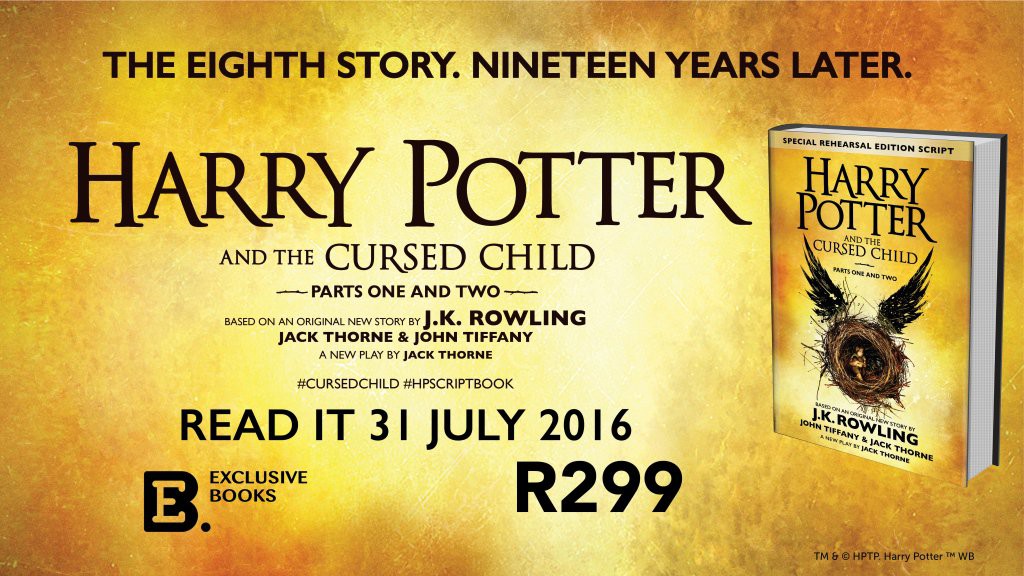 Wizards, witches and muggles alike are joining forces to celebrate the release of Harry Potter and the Cursed Child Parts I&II, the first Harry Potter title to be released since the final book of the original series was published in 2007.

Exclusive Books and the Ministry of Magic have joined forces to create a magical competition for those joining us at one of the 7 Harry Potter Midnight Launch parties at midnight on 30 July till early morning on 31 July 2016.

Simply post a picture of you enjoying the party onto our Facebook or Twitter pages using the hashtag #HarryPotterSA and you could win one of two Harry Potter hampers including the full box set of the original Harry Potter series as well as a copy of the illustrated version of Harry Potter and the Philosophers Stone!

Extra points will be awarded to those who have dressed for the occasion!

Competition runs from Midnight on 30 July to 02 August. Winners will be announced by 05 August.

Please note that the following Terms and Conditions for Exclusive Books and www.exclusivebooks.com online competitions may vary according to the specific competition and may change from time to time to reflect new policies.
• Prizes may only be claimed by winners who live in South Africa.
• Entrants must attend a Harry Potter Midnight Launch Party in order to qualify (entry to parties is strictly by invitation only)
• Winners have one month to claim their prizes. If the prize is not claimed, it will go to the runners-up.
• If you have won an www.exclusivebooks.com or Exclusive Books competition within the last 30 days, you will not be eligible for the prize draw.
• The judges’ decision is final and no correspondence will be entered into.
• Exclusive Books reserves the right to change the prize.
• Staff members of Exclusive Books and members of their immediate families are not eligible to win.
• By entering the competition, you agree to receive notification announcing the winner(s), once the draw has been made.
• Competitions are subject to www.exclusivebooks.com’s general Terms and Conditions.