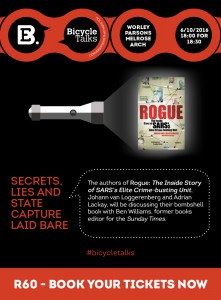 The Bicycle Talks: Conversations that move you

Exclusive Books and the Graduate School of Business, University of Cape Town are delighted to announce the launch of a new series of intimate dialogues on today’s most important topics, The Bicycle Talks.

The inaugural Bicycle Talk will take place Thursday 06 October in Johannesburg, and see the authors of the bombshell new book, Rogue: The Inside Story of SARS’s Elite Crime-busting Unit, Johann van Loggerenberg and Adrian Lackay, in conversation with Ben Williams, former books editor for the Sunday Times.

‘The inspiration for the name of the talks came out of an idea on the top of a bus in Barcelona,’ said Exclusive Books CEO, Benjamin Trisk. ‘The logo for the town planning department in that city is a bicycle. The reason it is a bicycle is because if you stop pedaling you will fall off. The idea behind the Bicycle Talks is to curate a discourse that concerns all South Africans so that hopefully in the debate we gradually come to understand the viewpoints of others.’

Peter G. Wingrove, Executive Director of the GSB Foundation, had this to add: ‘These Bicycle Talks represent a timely and critical juncture in SA business conversation, bringing together thinkers, academics and business leaders to address the pressing issues we are now dealing with. The partnership between the UCT Graduate School of Business and Exclusive Books in this series is exciting and presents great possibilities to jumpstart national conversation – and action.’

One Response to Exclusive Books and the Graduate School of Business, University of Cape Town Launch New Dialogue Series, The Bicycle Talks